The World Health Organisation (WHO) and the United Nations Children’s Fund (UNICEF) define female genital mutilation as all procedures involving partial or total removal of the external female genitalia or other injury to the female genital organs for non-medical reasons. 1 In most practicing cultures FGM is strongly advocated and carried out by women against women down the generations motivated by tradition and the ideology of purity. 23 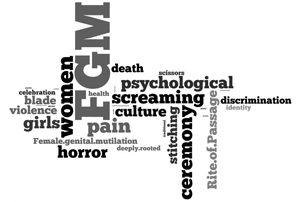 In 1997 a joint statement was issued by WHO, UNICEF and the United Nations Population Fund (UNFPA) which emphasised the practice as both a public health and human rights issue that needs to be addressed worldwide. The statement called to eliminate the practice.

“Female genital mutilation… is a deeply rooted traditional practice. However it is a form of violence against girls and women that has serious physical and psychological consequences which adversely affects health and is a reflection of discrimination against women and girls.”